“I lift up my eyes to the hills – where does my help come from? My help comes from the LORD, the Maker of heaven and earth. In He who watches over Israel will neither slumber or sleep. The sun will not harm you by day, nor the moon by night.”

Hearts is always eager to help! We feel we are strategically and centrally located in the Riverside Community where almost 35% of the community is living in poverty. Not a day goes by without someone ringing the doorbell with a need. Every day of the week, but Sunday, one of our programs is running.

You may have noticed over the last 2 years new programs put into place, but we’re not stopping here. For you to get to know them all, we’ve listed them below:

With all the different program names, it might get a bit confusing to know which one is which, so we’ve described each one. Feel free to share about them with people in need, or with those who may want to partner with us.

Hearts began in 1990 with the goal to feed the chronic homeless people in Buffalo so that no one would go to bed hungry. Hearts Mobile Soup Kitchen was birthed and we began to see the need right away as both, the homeless and poor were standing in our feeding lines. The Buffalo & Erie County Library, being pro-homeless and located where the majority of the homeless can be found, approved Hearts to park our soup kitchen vehicle next to their building at Ellicott and Lafayette Streets. This food shuttle operates Tuesday through Saturday, 52 weeks of the year. We recently added hot meal drop offs to homeless shelters which has increased the number of homeless people we are feeding. In 1997, Hearts purchased a building in Black Rock Riverside where it was not only used to build a commercial kitchen, offices, and outreach center, we also built Hearts Thrift Shop, with the goal to provide quality clothing and household items at affordable prices while meeting the need in an impoverished area where people do not have transportation to suburban stores. Also, we planned it so that after expenses, profits would go back into our outreach programs. The thrift shop also meets the needs of local families in the community by providing clothing and household items at no cost to them. The thrift shop has always been a beacon, a shining light and place of refuge where friendship, support, and prayer can be found daily.

Over the years, Hearts carried out other programs for children and families. As we learned more about the needs in our community, studied Census statistics, and received inquiries from other agencies outside our area asking us to expand our current services, Hearts responded by opening Hearts Harvest Food Pantry with the goal to provide groceries to our neighbors. We were able to purchase and refurbish a building right across from our current building which created a campus and ministry center.

As we began our partnership with FeedMore WNY, who provides much of the food we distribute to the community, we also became involved in operating a monthly food distribution called Hearts Mobile Food Pantry which offers an additional resource for families in the neighborhood, a supplement to the groceries they receive through our regular food pantry distribution. 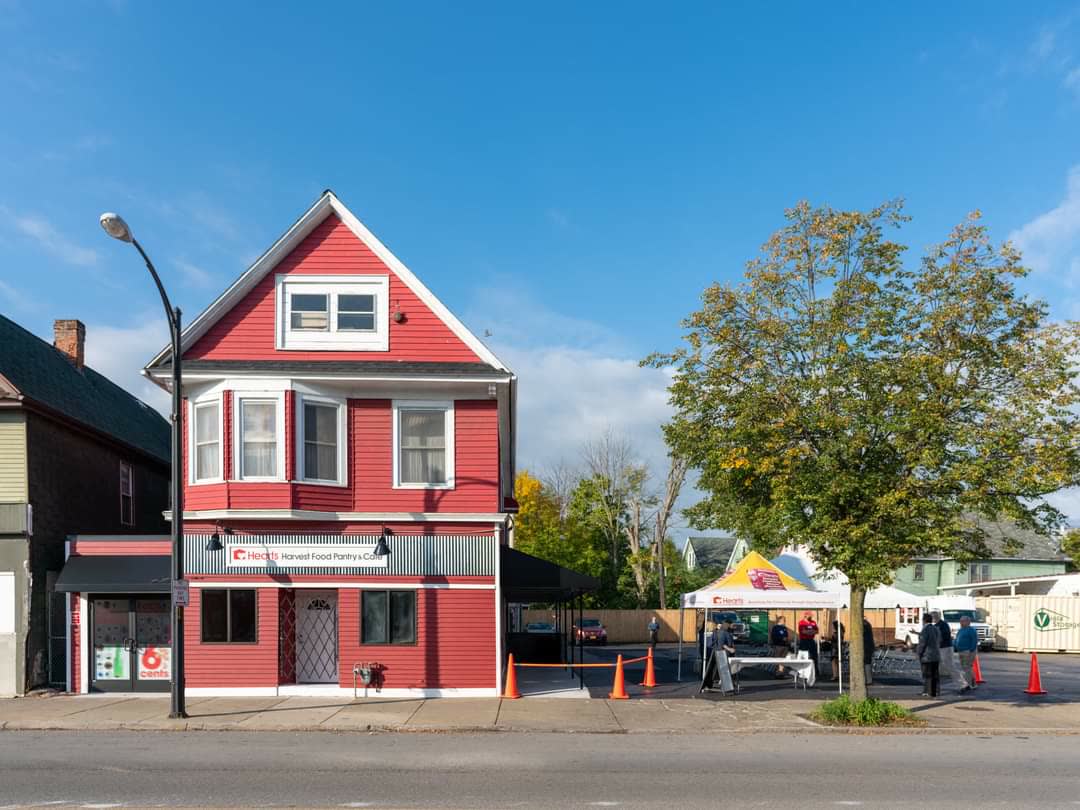 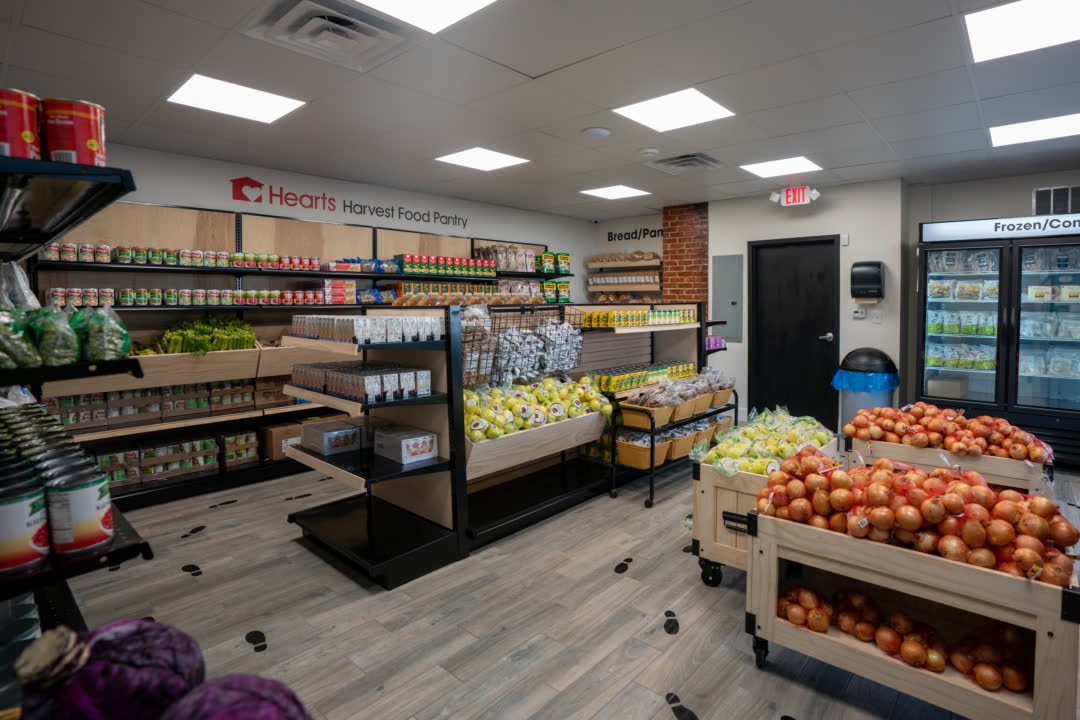 In order for Hearts to do our part to keep our programs running, we have created revenue generating programs, which started with Hearts Thrift Shop, and we continued on to include a Textile Recycling Program which allows us to recycle unusable clothing and sell it per pound, as well as a Bottle/Can Redemption Center which is connected to the new building that houses Hearts Harvest Food Pantry. Although these are profit bearing programs, they provide finances to run our outreach programs. 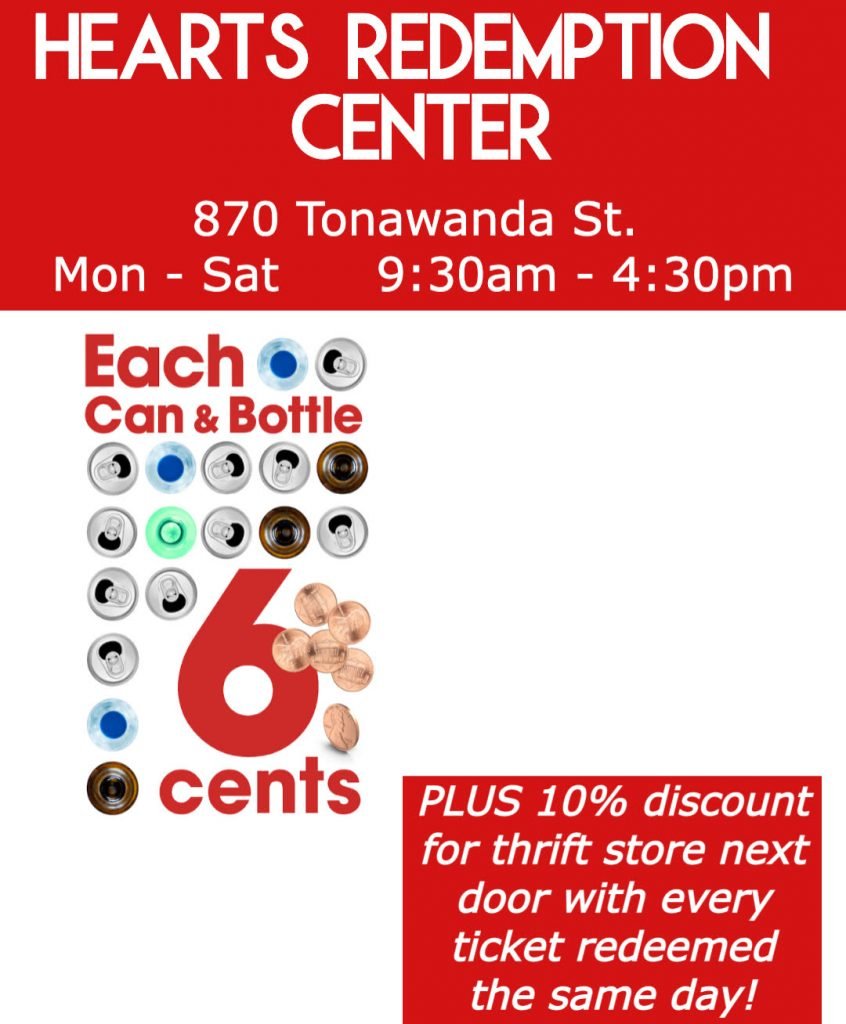 In keeping with our goal to reach out to people in need, Hearts is preparing to launch 2 additional outreach programs which we are very excited about. They allow us to go even deeper into the Black Rock Riverside area, as well as go beyond our borders.

You will find an insert with this newsletter highlighting the next program to be launched, Food Pantry Express. This refrigerated truck will allow Hearts to take food to people in need beyond our immediate area. The insert outlines this new program.

In the near future, Hearts will be able to open Hearts Café & Community Center that we unveiled when the food pantry building was opened. This space will be used as a place for the community to come and sit, as well as a space for outreach and education. 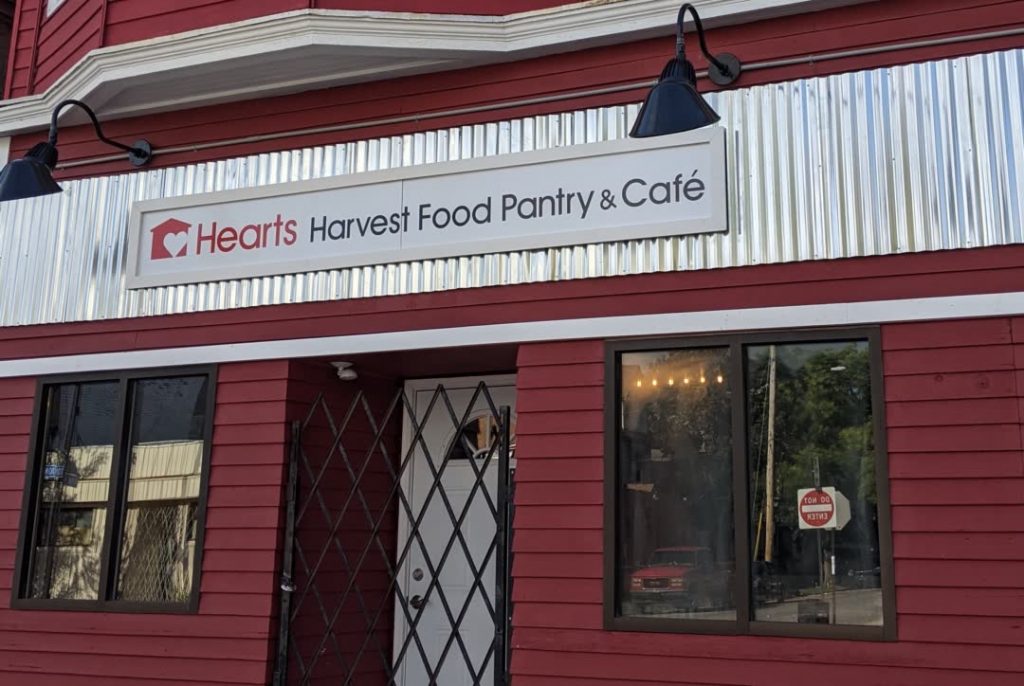 We are so grateful to God, our ultimate provider, for giving us all of these outreach opportunities. You can view Hearts complete history and transformation over the years on our website at heartsforthehomeless.org/history/.

Join us as we continue to grow and reach out to God’s people who are in need and hurting. We are grateful for your continued partnership.

TALK FROM THE STREET & HEART 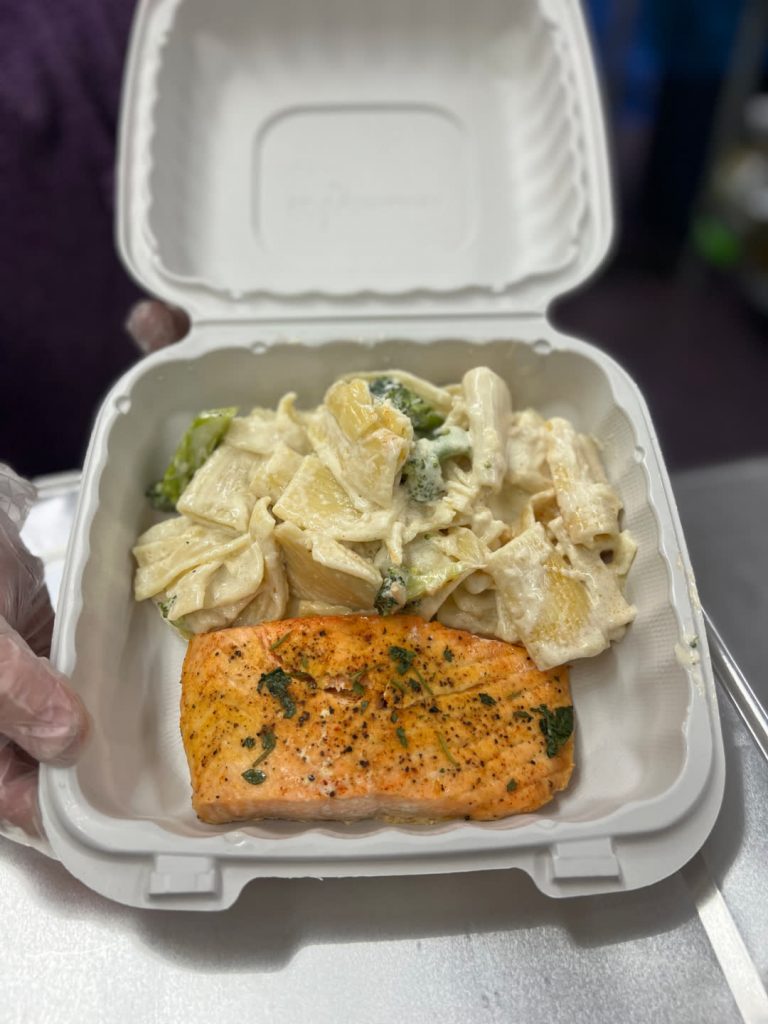 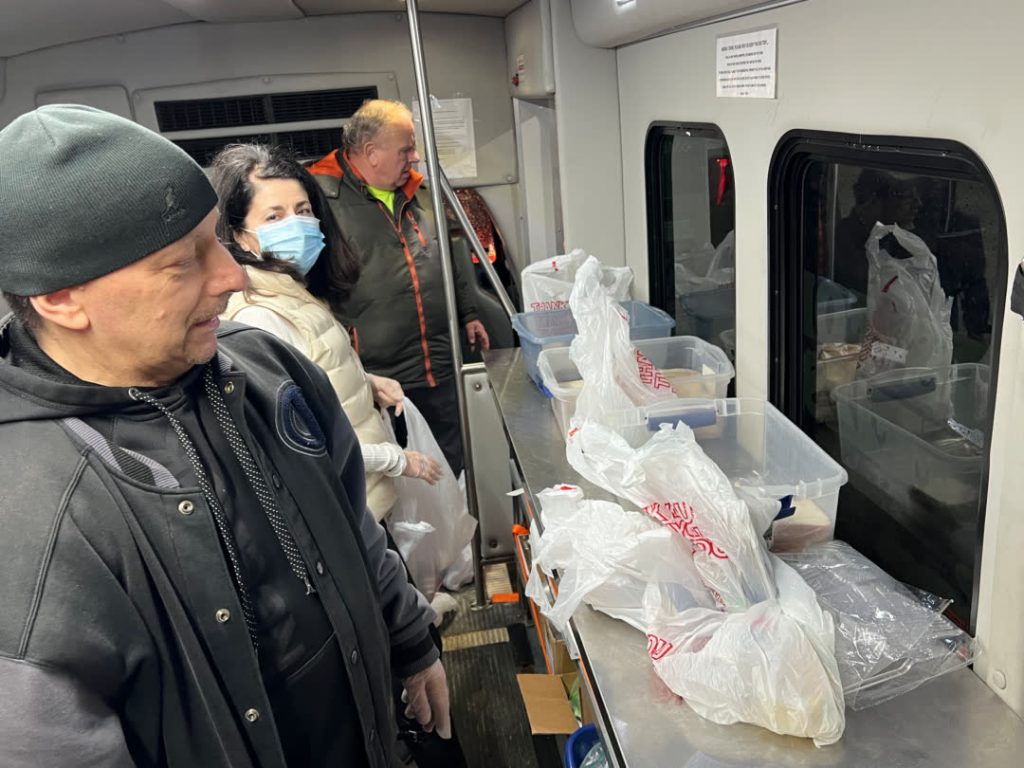 As the weather stayed bitter cold for the most part of February, hot meals were a welcome fuel for cold and worn bodies. A local restaurant made the day brighter one Thursday evening by delivering hot, fresh salmon dinners with a side of pasta & broccoli, for Hearts to distribute to those who stood in line at the Downtown Library.

Everyone was so grateful for the meals from Bailey’s Seafood. They hope to drop off meals weekly to us made possible by a restaurant resiliency program through FeedMore of WNY which helps both local businesses and non-profits. 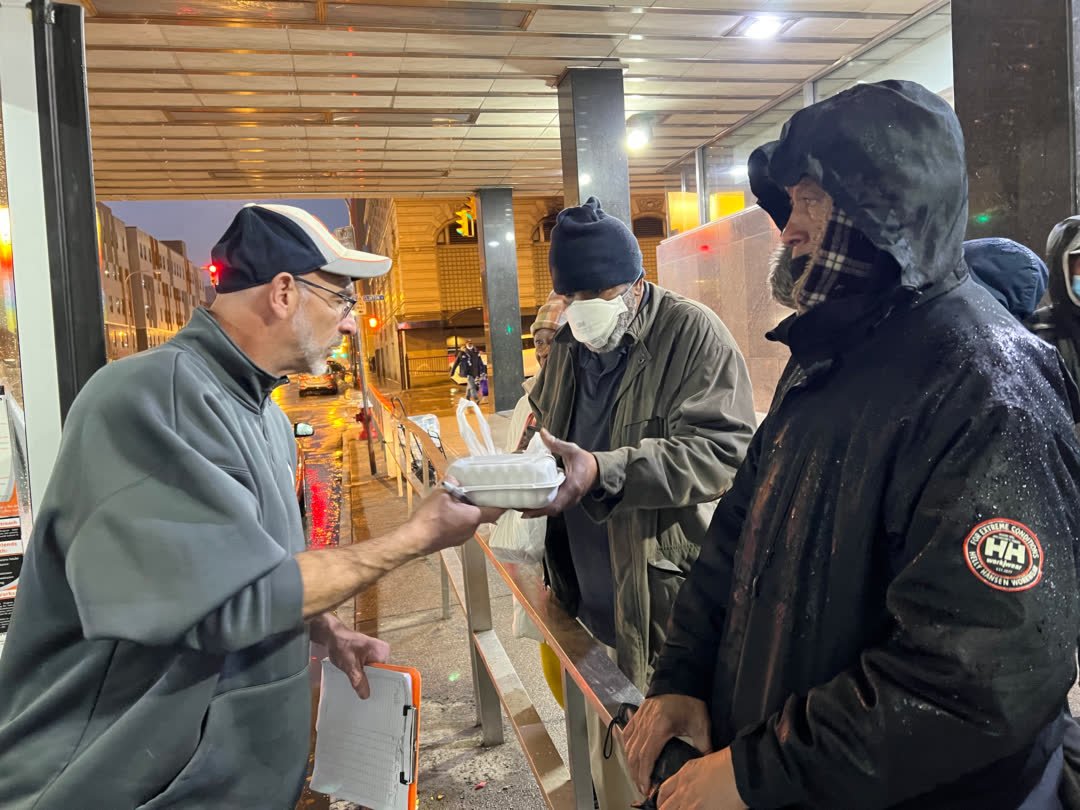 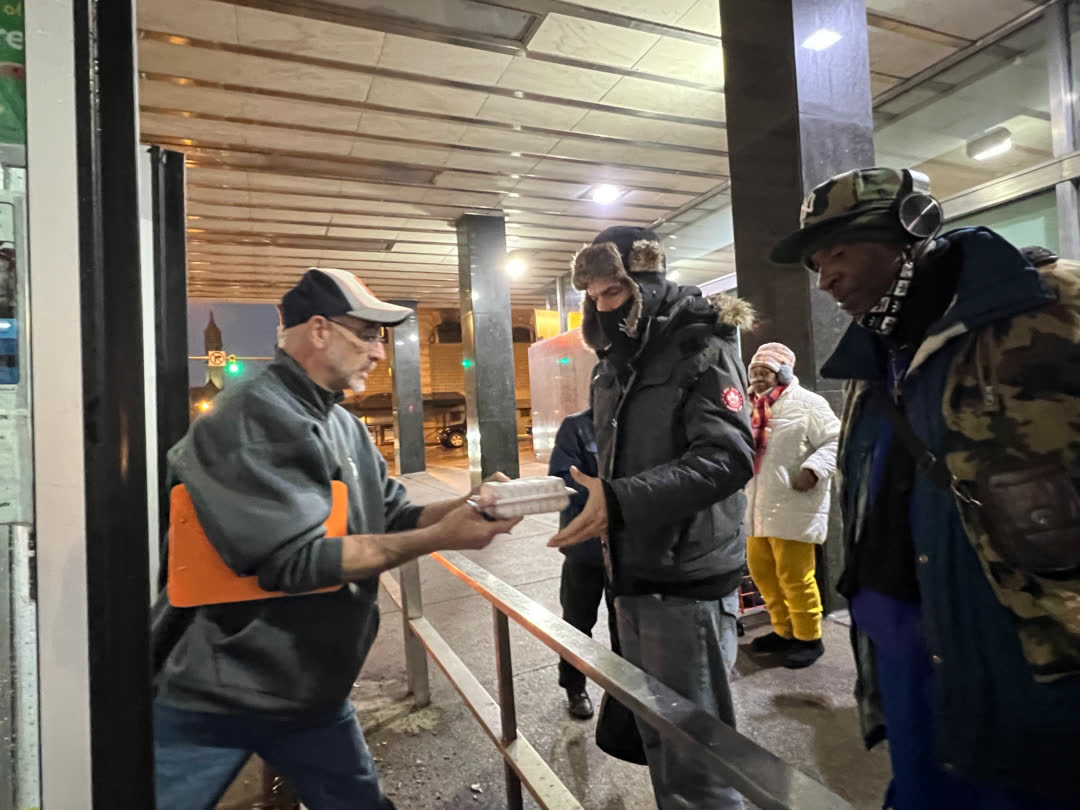 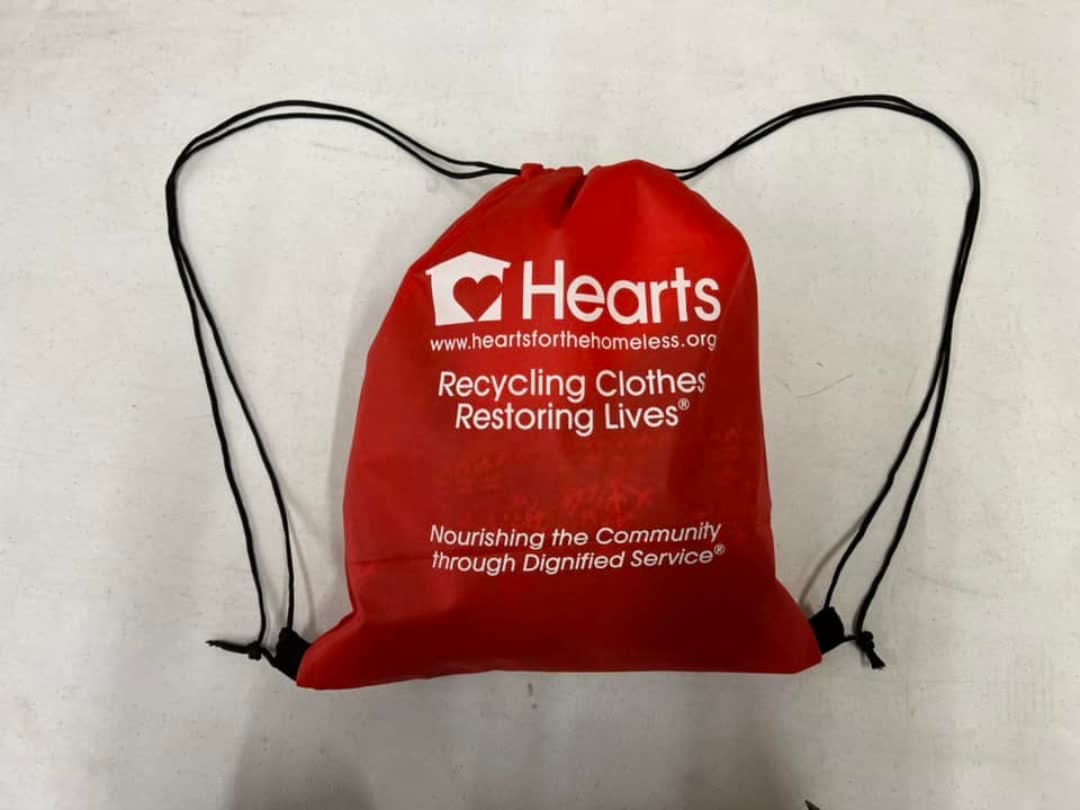 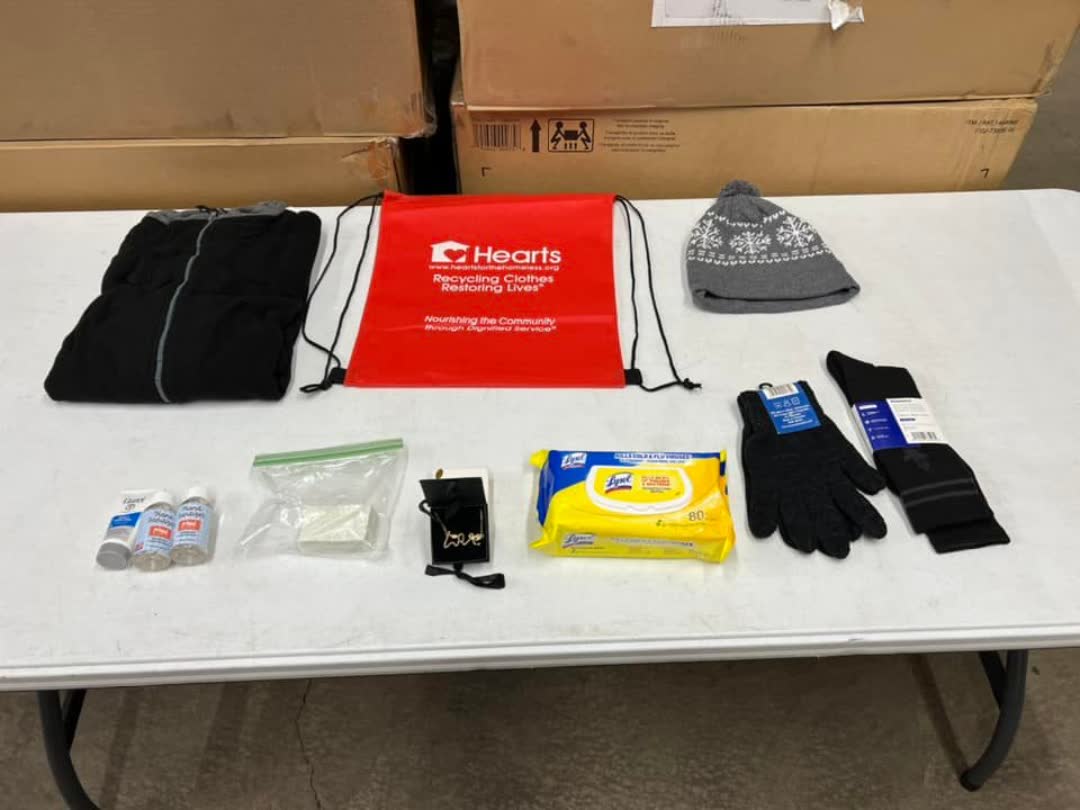 Hearts’ shares “the love” every chance we get, so of course February 14th, last month, was a day to do just that! Everyone in line received a Valentine’s Day Gift bag stuffed with useful supplies and even a greeting card and “love” necklace.

DO NOT LEAVE DONATIONS OUTSIDE

Hearts Harvest Food Pantry serves the 14207 area. Our pantry staff and volunteers welcome those in the community who need the help from a food pantry to feed their families, Monday 12pm to 4pm and Fridays 10am to 2pm at Hearts at 890 Tonawanda St. Riverside.

Hearts Mobile Food Pantry is held every 4th Wednesday of the month at Hearts Outreach Center at 890 Tonawanda St., Riverside, from 1pm to 3pm (sign-in at 12:30pm). Families in our community can come as often as we have them as a supplement to our onsite food pantry.

February’s Mobile Food Pantry drew in a crowd; many people showed up early and they were lined up from Hearts garage, through the parking lot, all the way to the front sidewalk on Tonawanda Street! As the crowd waited for the FeedMore truck to arrive with the food, Skylar, Hearts’ Program Manager, was able to share a scripture and a quick message with everyone. He finished his message with a prayer before the food was distributed. Everyone left with boxes full of food, blankets, and clothing. All in all, it was a great Mobile Food Pantry for the community!

Find Out More About the Food Pantry

We are so grateful for all of your donations. We also have a bin onsite at our outreach center at 890 Tonawanda Street; you can find the bins located in your area by going to our website at www.heartsforthehomeless.org, click on Bin Finder, put in your zip code and those in your area will appear.